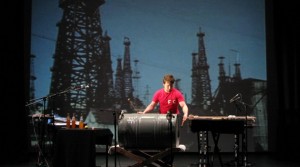 On Saturday 15 June Powerplant perform the new album – 24 Lies Per Second – complete and live, at Bishopsgate Institute as part of Spitalfields Music Summer Festival in East London. Inspired by ex-presidents, Austrian film-maker Michael Haneke and the Amen Break the show features new music by British composers Graham Fitkin, Max de Wardener, Dominic Murcott and Matthew Fairclough, alongside early works by American pioneers Conlon Nancarrow and Steve Reich. With sound design by Matthew Fairclough and visuals by Kathy Hinde, plus a selection of voyages from Gabriel Prokofiev’s Import/Export – suite for global junk, we hope you can join us. More details and tickets here. Facebook users can join here tickets from £5 upwards.

My Xylosynth is such a beautiful instrument. I'm really thrilled to have it here and look forward to many years with it. Thanks for working with me through my questions and the ordering process. I really appreciate the high level of customer service.